The Soyuz MS-06 spacecraft is seen as it lands with Expedition 54 crew members returning after 168 days in space onboard the International Space Station.

Earth Overshoot Day marks the point in the calendar year when humanity’s consumption of natural resources exceeds our planet’s yearly biocapacity. As of August 1st, only seven months into 2018, we have already used up all the resources that Earth is able to generate over the course of one year. To use an extended metaphor, imagine the sum of Earth’s renewable resources as a global bank account. Every time we consume or benefit from the resources provided by the planet’s atmosphere, land, and oceans, we withdraw money from the account.

This bank account contains unimaginable wealth, but it is by no means infinite or permanent. It has accumulated gradually through compounding interest on the initial deposit over a very, very long period of time—4.54 billion years. With 7.6 billion people all sharing the same balance, the stability of Earth’s natural resources cannot be taken for granted. Such a large account balance generates a lot of money through interest. The planet provides us with food, renewable energy, and abundant raw materials. In absorbing our waste and pollution, it purifies the air we breathe and water we drink. Ideally, we’d be able to comfortably live off of the interest alone, not having to touch the actual balance.

Clearly, that is not the case. We’ve already burned through the interest that would be generated in all of 2018. We’ll be eating into our initial capital for the remaining five months, ending up with less money in our metaphorical bank account than we had at the start of the year. This is doubly concerning: Our account balance diminishing is bad enough on its own, but the interest we earn also decreases as the endowment shrinks, making it far more difficult for us and our descendants to earn back what we use.

Just because Earth Overshoot Day is calculated once for each calendar year doesn’t mean we begin each year with a blank slate. The global “bank account” has effectively been in decline for five decades, as advances in efficiency and technology have failed to keep up with growth in consumption and population. To make up for this, we’ve even liquidated our long-term bonds in the form of nonrenewable resources, such as coal and oil. These fossil fuels, which formed over hundreds of millions of years, are now being extracted and consumed on a human timescale, destroying ecosystems and accelerating the rate of climate change. 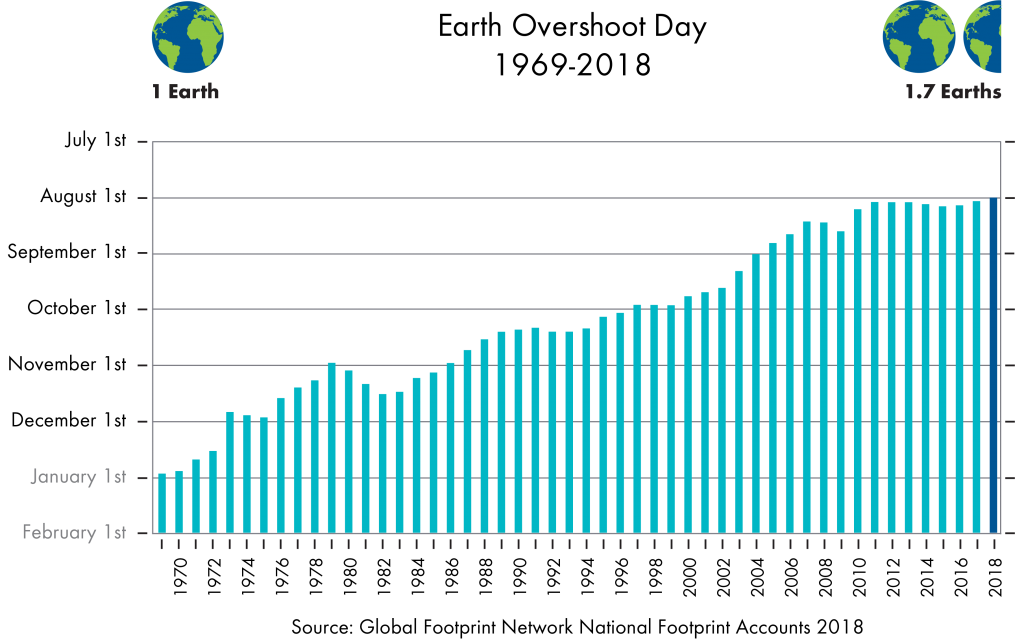 An important fact to keep in mind is that the Earth is not just a bank account made to serve the needs of humans. It is a living, breathing entity, home to billions of living, breathing animals and plants. Reducing the planet’s richness to a financial metaphor, while a helpful visualization, may misrepresent the relationship humans have with the planet. Passing down the bank account to future generations in a better condition than we found it is definitely desirable, but so is protecting the planet for its intrinsic value outside of what it offers to humans.

All four are worthwhile and attainable goals, but the last one seems to be left out of many conversations to #MoveTheDate. Measures to curb population growth would go a long way in reducing our ecological footprint. If the average family size decreased by 0.5 children by 2050, it would push Overshoot Day back by 30 days.

The tragedy here is that it’s an unequal distribution of Earth’s resources—unequal access to the “bank account’—that is responsible for so much unsustainable population growth. There are currently 214 million women in the developing world who want to avoid or delay pregnancy, but aren’t using contraception. Fulfilling this unmet need for family planning would pay an enormous dividend towards the future well-being of our entire planet and every person, animal, and plant that lives on it.

One thought on “Earth Overshoot Day: A Lesson in Basic Personal Finance”